My 15-year-old son has a bit of a daredevil streak in him. Sometimes it works out and other times we end up with a trip to the hospital. This time I’m wondering if there’s such a thing as a dental hospital. A tooth he banged has turned a dark color. We’ve nicknamed it his zombie tooth. But, I just looked online and the dark color means it’s dead. We were joking about the zombie thing, but if his tooth is really dead do we need to remove it and get a dental implant? 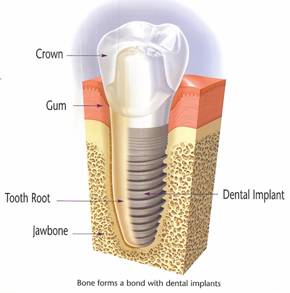 Diagram of a dental implant.

Whew! You’ve certainly got your hands full with that one! At least you know he’s not a coward. I’m going to answer these things one at a time. While there isn’t a dental hospital, most dentists will see their patients right away in cases of dental emergencies. Talk to your dentist about what his emergency protocol is the next time you see him, or now…seeing as your son has dental trauma.

Next, tell your son it’s awesome he chose to get a zombie tooth just in time for Halloween. That’s when those creatures tend to make themselves known anyway. While, yes, it is dead; that doesn’t necessarily mean it needs to be extracted.

Your dentist will do an x-ray of the tooth to see what type of damage was done to the pulp of the tooth. If the tooth can be saved, he’ll do a root canal treatment and possibly provide a dental crown above it. His zombie tooth will have its own costume that way, but will be unable to infect any other teeth with its zombie virus.

Instead, just get a temporary replacement for his tooth and then, when his body is ready, you can have the permanent replacement done. First things first though, schedule an emergency appointment to see where his injured tooth stands.