I’m a huge fan of the Real Housewives series and I’ve been following along with story of Yolanda Hadid. She was on social media last month saying she had visited a holistic dentist in order to have all her mercury fillings removed. She has also had all her crowns removed as well as silicone breast implants. She says it’s all part of her path to wellness — that this is the only way she’ll recover from Lyme disease. Is that true? I’m healthy, aside from regular allergies, but I’ve also heard that mercury could be causing those and other minor ailments. I’m wondering if there’s a benefit for people with milder conditions as well. If so, how do I find a holistic dentist to do the work for me? I’ve heard this is controversial, if not downright dangerous, but if it can lead to better health, I don’t understand what the fuss is. — Esther

Esther,
There is a growing body of evidence that suggests ongoing exposure to mercury vapor could cause medical issues, particularly in immune-compromised patients. The ADA stands by the safety of amalgam fillings and considers the vapor released over time to be nominal. The studies the ADA acknowledges indicate there is not enough evidence to conclude amalgam poses a risk. At the same time, there are people like Dr. Oz, who have spoken about the potential dangers of amalgams for years. 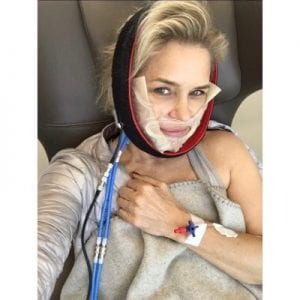 Holistic dentistry concerns itself with the whole body and Yolanda is seeking treatment to help with her overall wellness.

When it comes to Yolanda Hadid, the New York Post recently ran a story saying what she had done “is unnecessary and could even be dangerous.” The Post even cited several “experts” who claimed there was no health benefit. That’s a load of hogwash.

To be blunt, we know mercury is dangerous and even deadly. The argument these entities want to make is that it’s safe in small doses. Perhaps it is, or perhaps it’s like so many things we simply don’t have enough evidence on. But, if the FDA was willing to put a warning in place for pregnant women and children about the dangers of amalgam, saying “The developing neurological systems in fetuses and young children may be more sensitive to the neurotoxic effects of mercury vapor,” then shouldn’t other sensitive groups be concerned? Shouldn’t we all be preemptively only using things on and in our bodies that we know to be healthful?

As for holistic dentistry, the practice concerns itself with the whole body, which is why you may have to search for a special kind of doctor in order to have your amalgam fillings removed for the sake of overall health. In this type of setting, the office staff will also take extra steps to minimize your exposure to mercury vapor during the removal. However, any dentist will probably be glad to replace the fillings, but will likely do it for “cosmetic” reasons, rather than to remove the mercury.